We're the Women Who Woodfire of the Hudson Valley. We can't wait to meet you on the inaugural tour this spring!

This tour is centered around promoting and supporting the ceramic works of women, gender expansive, and queer woodfirers. For our first year, there will be three hosts with three guests at each stop - a total of twelve artists' work will be presented on May 21-22, 2022. 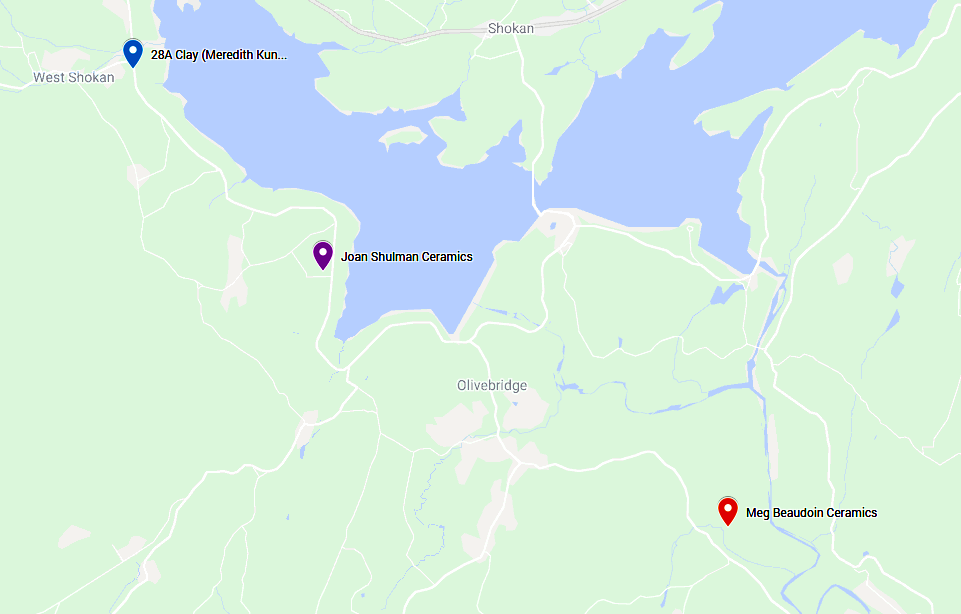 Clay is the connecting force for all 3 host studios (Meg Beaudoin, Joan Shulman, and Meredith Kunhardt) and wood firing is the community that brings them together on their first annual Hudson Valley Women who Woodfire Pottery Tour.

Meg Beaudoin left her 20 year career as a psychologist in 2013, and moved to Stone Ridge, where she has built a studio and a life as a full time potter. Soon after her introduction to clay, she had the opportunity to participate in a wood firing and fell in love with both the process and the resulting surfaces. Since 2008 she has fired her work in anagama kilns with Jeff Shapiro, Jack Troy, and others. Each firing lasts from 3 to 7 days. During this labor intensive process, Meg met Joan Shulman, who had been wood firing since 2003.

Joan Shulman earned her art degree at City College, where she studied ceramics with Paul Chaleff. After graduating, she opened Stepping Stone Pottery in Cobble Hill, Brooklyn, and joined a group called Friends of Fire, where Joan was introduced to Tony Moore and his noborigama wood fired kiln. She states: “With each firing comes the same intensity, anticipation, and excitement as the firing before.” She was hooked. The wood firing ceramics community ever expanding, stoking the midnight to 8AM shift with Dan Greenfeld who built a kiln of his own and invited a ceramics class from Skidmore college to his Spring firing in 2014. Joan met Meredith Kunhardt during this firing.

Meredith Kunhardt was fascinated by the wood firing process. She took her first graveyard shift, and knew then that seeking out wood kilns to fire was a beacon of light on her career path. Meredith was hired to work at Sugar Maples for the summer of 2016, where she loaded and fired the wood kiln. Sugar Maples opened up a world of wood firing, meeting Jack Troy, and Suzanne Troutman, the woman who would donate much of the brick to build her own wood kiln now located in West Shokan, NY.

All participating artists have exhibited their work locally and in galleries across the country.

“Firing methods, which demand close interaction with the fire itself, tug at my heart. I love the hard work involved, the community effort, the feeling of collaborating with nature to complete the work. I seek surfaces that purposely encourage touch and by inviting the hand to explore the forms as well as the eye.”
-Puneeta Mittal

“My firing process uses a traditional wood kiln. I find that by beginning with traditional forms and firing techniques, I have created a jumping off place that gives me freedom to develop my own artistic voice”
-Debra Heid

“In my objects, I have turned movement and fluidity into stone and stillness. Fragments come together to create something like an artifact.
-Kayla Noble

“Wood firing serves as a tool for mark-making, enhancing my surfaces in a quiet yet dynamic way.”
-Emma Kaye

“The abuse and exploitation of animals has driven many of the world’s species to near extinction and beyond. It is my hope to open the minds and hearts of the viewers. Through the versatility of clay I create sculptural and functional forms fired in a traditional anagama kiln.”
-Eileen Sackman

“I continue to be amazed by the limitless potential contained within a lump of clay.”
-Barbara Allen

“I like the unique surfaces and the serendipity of the fire, the camaraderie, and the amount of work it takes for us to make extraordinary work together as a team”
-Lynn Isaacson